“Never doubt that a small group of thoughtful, committed citizens can change the world. Indeed, it is the only thing that ever has.”

Thursday, January 16, 2020, when the Forest Service will have a “scoping” meeting about the gold exploration proposed by F3 Gold to be held at the Black Hills National Forest Service Ranger Station, 8221 South Mt. Rushmore Rd, Rapid City, SD from 5:00 – 7:00 pm.

Wednesday, February 5, public comments are due on the proposed gold exploration project. Your comments can be sent via email or in a letter and mailed to the address above.

12/12/2019 -TODAY WE LEARNED: The Atomic Safety and Licensing Board (ASLB), an administrative law branch of the Nuclear Regulatory Commission (NRC), ruled today in a case involving the proposed Dewey-Burdock uranium mine in the southwest Black Hills. The ASLB ruled for Powertech Uranium and the NRC staff and against the Oglala Sioux Tribe, which has fought long and hard to protect cultural resources at the proposed mine site.

This could leave important cultural resources unprotected, if the uranium company was to receive the 10 permits it would need to begin its project. Currently, the NRC license is the only permit the company has, and this decision is likely to be appealed. So the company is now a long way from being able to begin mining. But this does mean we must redouble our efforts to stop this mine. If you have not talked to the people and organizations around you about this issue in awhile, please do now. Let them know that every voice counts in protecting the water and opposing uranium mining in the Black Hills.

The EPA has issued revised draft permits for mining water wells and disposal wells for the proposed uranium mine on the southwest edge of the Black Hills (Powertech’s Dewey-Burdock project) with the public comment deadline scheduled for Oct. 10, 2019.

ACTIONS NEEDED BEGINNING TODAY!
1. Request a 90 Day Extension,
2. Attend the upcoming Public Hearing to be held in Hot Springs, SD, and
3. Make your voice be heard that WATER IS LIFE!

UPDATE: HB 1153 – “Defer to the 41st Legislative Day” which also kills the bill, since there are only 40 legislative days those years.

House Bill 1153 was introduced in the South Dakota Legislature. The bill would bring state law in alignment with federal law, specifically section 106 of the National Historic Preservation Act. Section 106 requires consultation with tribes and Tribal Historic Preservation Officers as part of the review process when mining is proposed in an area. Including tribes and THPOs will help protect cultural and environmental resources when mining is proposed. (posted 2/1/2019)

A hearty thank you to everyone for taking action to protect water and voicing your opposition to destructive mining in the Black Hills.  It is important that we continue voicing our concerns on these issue. Mni Wiconi – Water Is Life.

Toxic mining was stopped in the Black Hills before. We can do it again!

The current uranium mining threat is Azarga/Powertech Uranium who needs the EPA’s approval for a Class III and Class V Injection Well Draft Area Permits to drill in the groundwater aquifers in the Southern Black Hills.  Approval of these permits would allow them to begin their mining operation in the Dewey-Burdock area.  These permits would allow the company to mine uranium in one groundwater aquifer (the Inyan Kara) and to dispose of the wastes using wells drilled into another aquifer (the Minnelusa).  The EPA’s public comment period ended on June 19th, however action is still needed.  Water is life. Here’s what can you do:

Let’s Stop Radioactive & Destructive Mining in the Black Hills, once and for all. Thank you.

If you are interested in volunteering your time or money or other resources to stop uranium mining, please contact Black Hills Clean Water Alliance 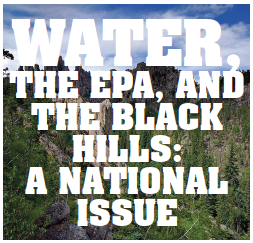