The South Dakota Department of Environment and Natural Resources (DENR) has issued an exploration permit to Mark Hughes of Custer. Hughes wants to explore for gold and other minerals. Hughes must also receive permission from the Forest Service before he can proceed with his project. The permit is for an area about 8 miles west of Custer and 4 miles east of Jewel Cave National Park near Highway 16. The exploration application and the exploration map differ in the exact location of the proposed project – something the DENR is working on.

The exploration project, according to the DENR, would consist of “approximately five trenches 10 to 30 feet in width and 10 feet in depth.” The DENR does not say how long the trenches will be. Hughes plans to access the site using 3/4 of a mile of two-track trail. The application does not say whether this trail is suitable for large equipment. When the project is over, Hughes’ Reclamation Plan says, “The affected land will be restored as good as possible.”

This is the second planned gold exploration project west of Custer. F3 Gold of Minneapolis has requested permission from the Forest Service to explore immediately west of Custer near Highway 16. This is the Newark Project, and it is on hold pending tribal consultation. F3 Gold also wants to explore immediately upstream of where Rapid Creek enters Lake Pactola. This is the Jenny Gulch Project, and it is also on holding pending tribal consultation.

The Forest Service, at last word, expects to move forward with the Jenny Gulch Project within the next couple months. We are still gathering information on the Hughes project, as the Forest Service Plan of Operations was not included with the public documents.

Help Protect this natural wonder and the water from exploration and mining.  Please sign our petition “HANDS OFF SPEARFISH CANYON!” 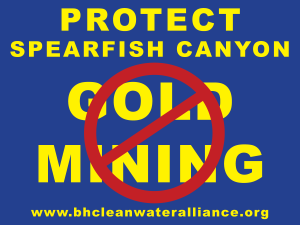